After 1492, when Columbus sailed the ocean blue with his fleet of three ships and discovered the Americas, the first global trade network was made. This global network is called the Columbian Exchange. It spans from Europe to Africa to the Americas in a triangle. As the map shows below many goods were exchanges from various places throughout the world. Goods such as potatoes, lumber, furs, tobacco, sugar and molasses made there way to Europe from the Americas. While Europe sent manufactured goods back to them and guns, cloth, iron and beer to Africa. Africa then sent mainly slaves to the Americas and gold and spices to Europe. It is easy to see that the Europeans thought that the Americas would be very beneficial to them. According to a letter written by Christopher Columbus to Queen Isabella and King Ferdinand, Columbus writes, "And I believe I have found rhubarb and cinnamon, and I shall find a thousand other things of value..." Although Columbus believed he had sailed to India, it is clear from this quote that Europe was in search of trade, and while Columbus did not find India, he did find trade.

As seen by this map, the triangular trade of the Columbian Exchange. http://hollablackdeath.wikispaces.com/The+Columbian+Exchange

More in the triangular trade 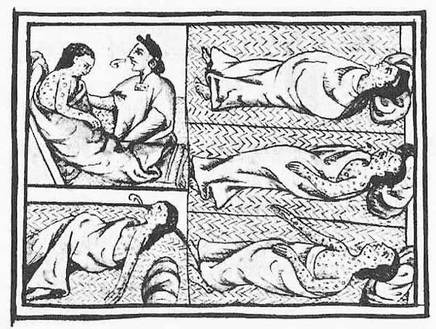 A Native America picture illustrating the effects of Smallpox. http://www.shmoop.com/columbian-exchange/
But goods were not the only things exchanged, diseases were also traded along this path. The Americas were hit the hardest by European diseases such as Smallpox. Foods that were seemed to help Europe also hurt it. For example the potato. In Ireland a certain variety of potato was grown that had been traded from South America. In 1845 a Great Potato Famine started in Ireland and lasted until 1852. The potatoes in the area had contracted a fungal bacteria and could not be eaten. This happens in South America as well, however there is a greater variety of potatoes so it never affected them as much as the Irish.
In the end, the Columbian Exchange started a network that continues today, jump-starting Globalization 3.0.