History of the Magnetic Compass 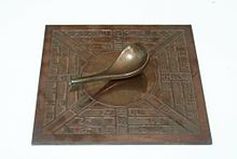 An ancient compass with a lodestone (220 AD)
The magnetic compass was first invented in China during the Han Dynasty (206 B.C.E.-220 C.E.). It was later improved upon during the Song Dynasty (960 C.E.-1279 C.E.) by statesmen Shen Kuo, who was the first person to determine the magnetic direction of north while experimenting on a compass. Kuo was able to use the astronomical concept of true north to state that magnetic compasses were indeed more accurate in navigation than any previous instrument. The magnetic compass was eventually traded on to the Arabs in the Islamic Empire. In the 1300's C.E., the magnetic compass was used by an Islamic astronomer to make a timekeeping device. The compass was eventually traded on to Europe, where it was worked upon and used by many scientists and sailors. At first, the compass helped Europeans navigate in the Mediterranean Sea and even in the English Channel, and it eventually helped them in sailing across the Atlantic, around Africa and to the Indian Ocean. 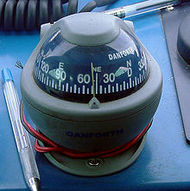 An example of a liquid compass used today.
Shen Kuo was the first person to apply the concept of true north to a compass. He found that steel needles were magnetized once they were rubbed with lodestone and mounted or placed in a floating position. The magnetic needles would point either north or south, thus giving the person using it the direction they are facing. Later on, magnetic compasses would be replaced by liquid compasses, which generally use the same methods. In navigation, the suspended needle points to what is called "magnetic north", which is an area slightly east of the North Pole.

Impact of the Magnetic Compass

The compass helped in navigating trade routes.
The magnetic compass, which was improved upon in Europe, was most important aboard ship. At sea, sailors could use these compasses to figure out which way they were headed, and they could use them to point their ship wherever they wanted to go. This navigational compass allowed Europeans to first navigate nearby waters such as the English Channel and the Mediterranean Sea. Although merchants had sailed these waters before, the compass made their travels much easier and faster, thus increasing their efficiency in trade. Perhaps the most important impact of the magnetic compass, however, was its use in discovering the Americas. In 1492, Christopher Columbus sailed due east, because he thought he was going to China. As we know, he stumbled upon America instead. After this came the significant European colonization in the Americas, where they wiped out most of the native population and used the land for themselves. Soon after this, Europe sailed around Africa and into the Indian Ocean, where they set up numerous trading posts and entered a world of rich exchange. Also, the magnetic compass allowed people to map out the world as they knew it, since they now knew what direction each country was in. Therefore, the magnetic compass effectively allowed Europeans to navigate across oceans and expand their empire, colonizing and trading everywhere they went.