The forced migration of Africans on the Trans-Atlantic Slave Trade had a tremendous impact on the global trading network and in the relationships between the various continents. Africa, Europe, and the Americas played a major part in this new system of trade. The effects of the African slave trade can still be seen in the world today.

A quote by Elikia M’bokolo, a writer and historian from Congo who specializes in African studies 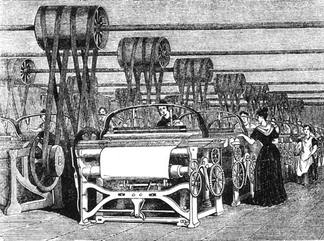 English women working in the factories
The European nations were the intermediaries in the slave trade between Africa and the Americas, and as a result, slavery had a significant impact on Europe’s economy. Beginning in the 1700s, approximately 30,000 slaves were delivered to the Americas a year, enabling these nations to earn a hefty profit. This profit was used to build factories and invent new goods, enabling the industrial revolution to start. With more factories came more jobs for those who were once the peasants of European society, allowing them to slowly climb up the social ladder (however, this effect would not be seen for decades). In addition, the Industrial Revolution brought about new social roles for women and children, and eventually enabling them to receive more rights and fundamental freedoms.

Effects on the Americas 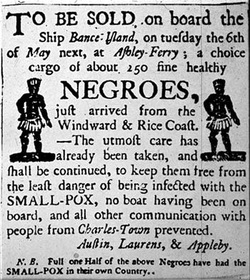 Poster showing the selling of slaves from Africa in America
With the growth of the new European colonies in the Americas came the increase of the importation of slaves from the African nations. In an extension of the above quote, the slave trade formed the basis of the economic life of the Americas. In the southern United States and in the Latin American countries, slaves were often made to work on the plantations, while in the northern New England colonies, slaves assisted artisans (blacksmiths, sail-makers, rope makers...) in their trades. Like in Europe, the slave trade allowed for the Americas to increase their exports, their GDP and consequently, their standard of living.

While the concept of the enslavement of other humans has been around since the early times in human history, the idea of slavery being associated with one race (the Africans) was a direct result of the Trans-Atlantic Slave Trade. In the early days of the United States, blackness was often equated with slavery, and those born into this practice had no hope of escaping, no hopes of receiving an education, and were constantly held back. Even after slavery was outlawed, Africans (along with other people of color) still had a lower place in American society, and there were still racial tensions in this region. To this day, race relations in the United States are still affected because of this practice.

Slavery had an enormous effect on the continents of Africa, Europe and the Americas. Its consequences are best seen on the economies of the regions, with Europe and the Americas greatly profiting from this practice, while Africa suffered (especially after it could no longer rely on the slave trade as a source of income). Slavery has caused a lack of innovation and education amongst the people of Africa, and a breakup of the unity of the people, leading to numerous civil wars. This has had a toll on the population of the country, which, by the end of the slave trade, was significantly lower than the populations of Europe and Asia. This practice also was instrumental in forming barriers between races, an effect that still has far-reaching consequences today.

Despite slavery being outlawed in every country across the world, it still takes place today. On the black market, approximately 27 million people worldwide are exchanged and exploited in over 140 countries.