In the 1930s, John Maynard Keynes brought about a new type of economic thinking, this type of
thinking is now called Keynesian economics, and it was a major part of how economic policies changed
during the 20th century to present day. Keynesian economics is an economic theory stating that active
government intervention in the marketplace and monetary policy is the best method of ensuring
economic growth and stability. What Keynesian economics is saying is that the government should
come in to “smooth out” any bumps the economy should encounter during the business cycle. The
government intervention in this sort of situation would occur in the form of stimulating the economy
with either government spending, or tax breaks. 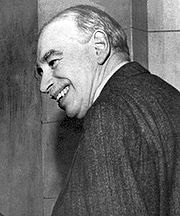 John Maynard Keynes
Keynesian economics goes hand in hand with monetary policy, which is defined as the actions
of a central bank, currency board or other regulatory committee that determine the size and rate of
growth of the money supply, which in turn affects interest rates. Monetary policy is maintained through
actions such as increasing the interest rate, or changing the amount of money banks need to keep in the
vault (bank reserves).

Both of these policies, when looked at in a fundamental point of view, are simply saying that
when things start to go downhill in the economy, some sort of higher power should interfere to keep
things afloat. These policies have been used a lot before, especially in the socialization of the United
States, and have shaped the way U.S. economics run today.