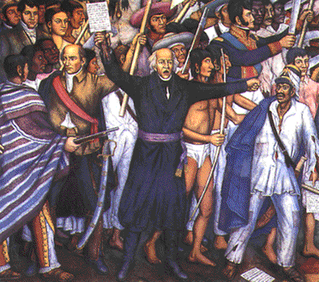 http://www.resumendehistoria.com-del-grito-de-dolores.html
One of the many effects of the Mexican Revolution was nationalism. At the beginning of the Mexican Revolution, Father Miguel Hildago and Costillo preached the Grito de Dolores, which is to this day quoted by many Mexicans on their Independence Day. To the left, you can see how many people thought that the Grito de Dolores was the symbol for the Revolution. At the end of the document it says, " ¡Viva, pues, la Virgen de Guadalupe! ¡Viva la América por la cual vamos a combatir!"(1) This translates to "Live then the Virgin of Guadalupe! Live America, for which we will fight!" As you can see this document was very motivational for the people at that time. You can even see from the picture that all the social classes were united and yet divided by this speech. They are united because they all want freedom, but they are separated in that they want freedom from each other. This kind of nationalism proved to be the countries downfall. From the Mexican Revolution individuals revolted against the monarch but also each other. The Grito de Dolores is an important primary document that shows us what people were thinking at the time. Unfortunately, because it has to be translated some nuances and idioms could be lost in translation.

The Constitution of Cadiz 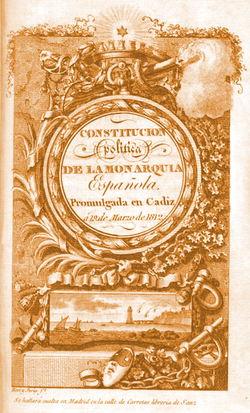 http://en.wikipedia.org/wiki/Spanish
The Constitution of Cadiz was the first of many Mexican Constitutions. This original document set the foundations of the nation to come. Many enlightenment ideals can be found in this document. This constitution was written by a collection of many representatives of the whole country, very similar to our own constitution. In other ways it is similar as well. In it's Capitulo II it set up a kind of Bill of Rights by stating who the citizens are, what their duties include and what liberties they will receive. Some of those duties include loyalty to the nation, the Constitution and to the people. Nationalism, that is found at the beginning of the war, mentioned above, can be seen in this document as well. This shows how strong a movement it was. Furthermore the liberties the citizens set about for themselves included suffrage for all individuals, freedom of the press, land reform and free enterprise. The intentions were pure from the beginning, unfortunately they didn't continue to have good leaders. This is just the first constitution. Between 1812 and1836 King Ferdinand VII abolished and then reinstated the Constitution three times. The Constitution gave the monarchy absolute power so he could veto whatever bill he wanted. So in the end, this constitution was more like the Rights of Man by Thomas Paine then a constitution like our own. One also has to consider the bias behind the interpretation of this document, because we are not from Mexico or that time period and do not speak Spanish it can be difficult to interpret it the correct way which will in turn change the meaning

Secularization of the California Mission System 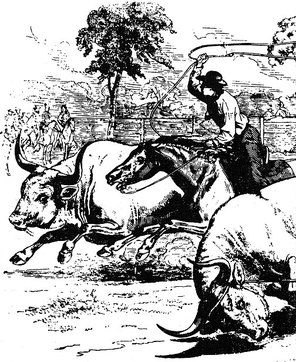 http://foundsf.org/index.php?title=Rancho_Life,_1833-1846
When Spain controlled Mexico and a vast amount of the west of the United States they sent priests and monks to Native American villages throughout the California area to convert them to Christianity. After Mexico gained its independence from Spain it became more and more difficult to run the missions.  By 1838 these mission trips were had allbut stopped.  In fact on August 17, 1833 the Mexican government passed a law demanding that the missions be secularized. The original law took the land from the missionaries and gave it to the natives, but this normally  wouldn't happen. Instead the Mexican government siezed these properties and sold them to ranchos. These were run similar to feudal states with a head and individuals under him running the workers under them. Many of the Native Americans from the missions would stay at these ranchos and were treated poorly. However, the economies of these areas were dependant upon the natives. This can best be seen from this quote from Salvador Vallejo, a prominent rancho at the time, " … Many of the rich men of the country had from twenty to sixty Indian servants whom they dressed and fed...our friendly Indians tilled our soil, pastured our cattle, sheared our sheep, cut our lumber, built our houses, paddled our boats, made tiles for our home, ground our grain, slaughtered our cattle, dressed their hides for market, and made our unburnt bricks; while the Indian women made excellent servants, took good care of our children, made every one of our meals..." (5). These individuals became slaves for these people, very similar to the African slaves of the South. This is interesting in our history especialy because one doesn't hear about the Native American slaves. Mainly, this is due to the fact that, the Native Americans did't have as extensive a civil rights movement and so one doesn't hear as much about them. This secularization eventually ended in the 1860's when most of the missions were returned to the Catholic Church, however the ranchos continued to use the natives as slaves. (4)