The rise of nation states in Europe: Nathan Starnes

In the 19th century Europe was divided into many different nation states.  The ideologies of these different nation states were changing into a new kind of political ideology called nationalism.   Countries that were forming out of this political ideology such as Germany and Italy formed by uniting smaller states with common "national identities".  Others such as Greece, Poland, and Bulgaria were formed by winning their independence.  As nationalism swept past Eastern Europe, Hapsburg and Ottoman rule started to decline.  The Crimean War gave hope to states such as Romania which were controlled by the Ottomans.  Romanian nationalists fought the Ottomans in hope to gain their independence .  At the Paris Peace Conference,  the Ottoman Empire was compelled to grant Moldavia and Walachia (Romania's land)  autonomy, which was to be guaranteed by the conferring Europeans states.

New nationalist states were the result of many wars that broke out thought Europe.  Wars such as the Austro-Prussian War in 1852 crushed Austria's influence on nationalism.  In 1867, Franz Joseph and a Magyar delegation signed the "Ausgleich," or Compromise, which divided Austria's empire in two, creating Austria-Hungary.  In the Franco-Prussian War in 1870, Bismarck, wanted to complete the unification of Germany and calculated that a war against France would arouse a nationalistic fervor in the independent states of southern Germany that would swing these states toward favoring unification with Prussia.    A Land League formed that appealed to Irish nationalism and aimed at more rights for tenant farmers and reduced evictions. The Land League boycotted peasants who moved onto lands where tenant farmers had been evicted, trying to force the new tenant to leave and deny the landlord new rent. This created violence and became known as the Land War.  Eventually Ireland gained its independence and became its own nation.   In March 1878 the Russians and Turks signed an agreement: the Treaty of San Stephano. Britain and Habsburg Austria disliked the treaty -- Austria because they believed that it encouraged Slav nationalism.  At that time the Slavs were under control of the British and they did not like the treaty at all because now the Slavs were there own nation state.  These are among the reasons that nation states have spread rapidly throughout Europe in the late 18th and early 19th centuries.


The following link is an interactive political map. Note the changes in political boundaries over the course of the period of French nationalism, as well as the industrial revolution. Also, look for specific events such as the Franco-Prussian War in 1870 and the Treaty of San Stephano in 1878. 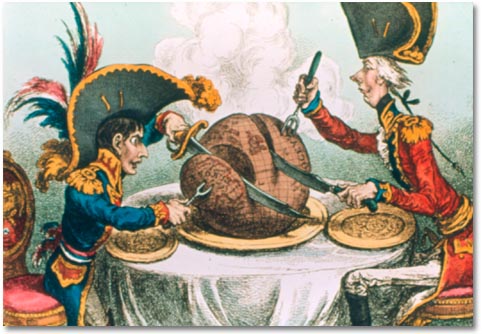 How the French Revolution affected the development of nation states: Nate Barton 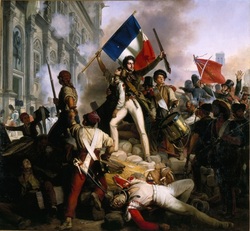 The spread of nation states was directly impacted by the spread of popular nationalism. It was through this notion of national pride that different states began to function with increased unity and strength. Rather than borders being defined merely by physical barriers, nation states began to draw lines of distinction based on people. This allowed for the better allocation of resources and increased motivation for trade, conquest, and defense.

Later in France's history, Napoleon Bonaparte was a vital component in the development of nation-states. Amid the chaos of the French Revolution in the late 1700's, most remaining medieval and feudal laws were overturned and a truly national law code was established. Similarly, a national military was created. Although not the only reason, France’s status as a nation-state was a key factor in its ability to dominate feudal neighbors in Italy and Germany. Napoleon’s military victories also paved the way for the emergence of nation-states in the rest of Europe simply because he provided them a common enemy under which to unify and fight.