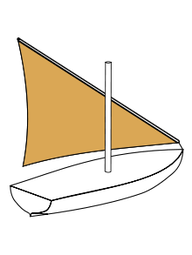 Lateen Sail
Innovative tools had a huge impact on travel, and made possible the Age of Exploration(Age of Discovery, Great Navigations).  Much travel and exploration between the 1400s and into the 1700s was done via the seas.  Traveling across oceans was no easy task, so new innovations involving maritime technology are what made this transportation happen.  Such maritime technologies were the multi-masted ships with lateen sails, the sternpost-mounted rudder, and the skeleton-first hull construction.  Lateen sails made it so the boats would rise better towards the wind, and made vessels more maneuverable than square-rigged vessels.  The lateen rig enables tacking and beating to the wind.  The Portuguese, who had exceptional naval capabilities, used the lateen sail on their travels around the southern tip of Africa to the Indian Ocean.  The sternpost-mounted rudder made boats easier to steer and control, while skeleton-first hull building made ships stronger and sturdier, allowing for more affective masts and sails due to their stronger framing.  These innovations made sea travel over vast and rough oceans possible. 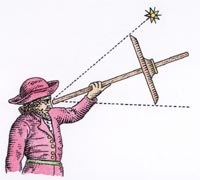 Man using a Cross-staff
While traveling the Atlantic, Pacific, and Indian Oceans, sailors needed to know which direction they were going, and used tools like the compass, the cross-staff, and the astrolabe to do so.  The compass was first invented in Han China, but eventually made its way to Europe where it was improved upon to become the dry compass.  With this convenient tool, which was kept in a small box, sailors could use it at sea to know where they were.  The cross-staff was a way to find the latitude one was at, which was helpful at sea.  The user had to observe the horizon and a star to acqure the altitude of the sun.  The back-staff was also used, which was easier to handle, but said to be less accurate than the cross-staff.  Another latitude indicating tool was the mariner's astrolabe(also sea astrolabe).  It found the latitude of a ship by measuring the sun's noon altitude or the meridian latutude of a star of known declination.  The sea astrolabe was an innovation from the original astrolabe, which was only reliable on land, not rough sea water with heavy winds  The use of this technology or the cross-staff, combined with the compass could tell a sailor relatively accurately where they were on the globe.  These innovations along with the developments of ships allowed for safer, faster, and easier travel, which made it possible for Europe to sail to all parts of the world to trade and colonize.

These maritime technologies like the astrolabe, compass, and improved ships made it possible for people, especially Europeans, to travel to lands that were unknown before.  As Europeans traveled and colonized foreign and new lands, especially the Americas, they brought their culture, religion, social and political structures, art, weapons, and various goods with them.  They also brought technologies, which could be improved upon and innovated by different peoples.  Through travel to different lands, trade grew, and so did the economies of the nations involved.

A continuity observed in the innovation of tools used for travel is that the tools were constantly improving.  They developed one tool after another striving for more convenience and better results.  The many different developments leading to the cross-staff are an example of this.  A change seen in the innovation of maritime technology is what boats and sails ended up being able to accomplish.  Ships started off just as canoes, traveling along the coasts of continents and islands, but developed more and more until they were able to sail across vast, stormy oceans, feeding off of the power of the wind and steered by a rudder.