Roads, routes ,and trade networks were set up during this period. The multiple crusades created a strong route from the Middle East to Europe. The Mongols then created a strong network in Asia to manage their empire, even creating a mail network to aid with communication. All of these things led to strong trade routes, fast communications, and more efficient empires. That is the impact that regional expansion had. 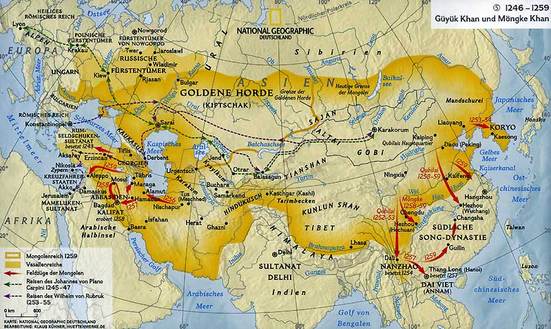 Militaries across the 3rd wave civilizations actually varied quite a large amount but their impacts can still be felt today. Europe waged war in the name of their god and the Middle Eastern dynasties expanded and defended themselves in the name of their god. China waged war to unite the region. Then the Mongols came with the simple goal of conquering everything. Each of these regions still show the results of those militaries today. The crusades left the ever lasting conflict in the religion's holy land that still goes on today, affecting the countries established in the area today, and even affecting global trade.

Social structures in some regions started to form that are similar to today. With the trade across regions the merchant classes were able to start to expand as there was more to be traded and farther to travel. This is not the start of a merchant middle class, but it is the change that allowed a growth of them to develop. Although in Europe the feudalism social classes still was far different than today. In China and the Middle East though they started to take shape.

The constant fighting of theocracy in combination with the crusades created the East West tension that exists today along with the fighting over religion that still exists there. In China there was an entire dynastic change which improved life for the people living there.

With Eurasia finally trading across all regions, ideas were finally allowed to flow all the way across the continent. For example, gunpowder was moved from China to Europe through trade. This trade was propagated by empires such as that of the Mongols being formed. Another way that ideas spread was through war. War may seem like a cruel way to spread innovations but it was extremely effective. Mongol armies spread new tactics in combat and were able to adapt and learn how to use siege technology which was originally Chinese. Once an empire spanning multiple regions is established, trade routes quickly follow, allowing for safe exchange. Although new ideas came about, trade allowed many ideas once exclusive to a region to be spread to new places. For example, many inventions developed by the Chinese were able to make it to Europe both in this time period, and that of several centuries ago.

Not a huge number of innovations were developed in this time period, but those that were eventually began to circulate among the different cultures. Chinese developments that were made during Europe's dark ages slowly made their way over to the Europeans. This led to the West being able to have innovations that would lead them to a position of power over the rest of the world.

The environment did not have a huge impact during this time frame, as the obstacles that were present had already been overcome centuries prior to then.