Map of the expansion of the Islamic Empire
With the expansion of the Arabic Empire in early sixth century came the development of a new religion: Islam. The religion originated on the Arabic Peninsula under the guidance of prophet Muhammad and spread to many neighboring regions, eventually encompassing many vast empires that had previously dominated the global stage.

Expansion under the Rashidun Caliphate (632-661) 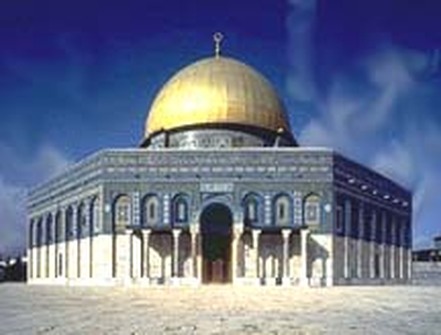 The Dome on the Rock, the first major Islamic Mosque, built on Solomon's Temple in Jerusalem.
Ali, the son-in-law of Muhammad, became the first Caliph under the Umayyad Dynasty. He believed in Shi‘a Islam (heredity model), and therefore believed that the first three caliphs under the Rashidun  Empire were illegitimate rulers. From 661 CE to 750 CE, the Umayyad waged many successful military campaigns and conquered vast territory, which helped to further spread the message of Islam. The empire reached as far as Constantinople, France, and China, before its military forces were forced to turn back. This dynasty was responsible for building the Dome on the Rock, one of the first mosques, in Jerusalem on Solomon's Temple.

This caliphate also differed from the previous in the way that it viewed those who were newly converted. G.R. Hawting, a British scholar who studies Islam noted, “Islam [during this time] was in fact regarded as the property of the conquering aristocracy,” meaning that those from the old Arabic, aristocratic families were often favored over the converts from conquered lands. As a result, they were barred from government positions and were required to pay more in taxes. This caused resentment amongst the non-Arabs, leading to a change in power and the birth of the Abbasid Dynasty.

Map of Islamic states today
As time went on, the power of the Middle Eastern region continued to change hands. With trade networks like the Silk Road, the message of Prophet Muhammad was passed all over the world, attracting many followers. As of 2009, approxmetly 1.5 billion (22%) of the world’s population is Muslim, making it the second largest religion.