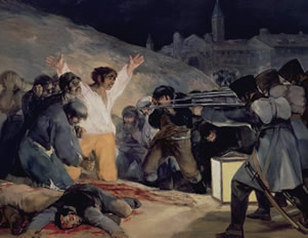 http://www.neh.gov/news/humanities/2010-01/Napoleon.html
In 1807, Napolean invaded Spain in hopes of weakening Britain;s global hold on other european nations. Furthermore, Napoleon was eager to expand his influence by way of his family,  On June 6, 1808, Napoleon issued a decree, which proclaimed Jozef Bonaparte the new King of Spain, a decision that flew in the face of ordinary Spaniards, who vehemently opposed Napoleon’s invasion of their country. On May 2, 1808 a popular uprising against the French occupation of Spain began in Madrid, with French Grand Duke Joachim Murat showing no mercy in cracking down on the rebels. He brutally subdued the Spanish into submission which can be seen in the painting pictured by Francisco de Goya called A Execution of May 3 1808. Here is where is seen as a spanish man in "white" for surrender or peace is in fear of Napolean soldiers with his hands held up. Obvisously, with De Goya's biased as a spanish artist this event is slightly exaggerated due his people being the one that is under invasion. However, it shows how chaotic Spain was in at this time period.
Within Napolean Bonaparte's conquest of Spain, colonies were forced to take action of their own with their homeland now in complete disarray. Ultimately colonists, especially creole whites, saw independence from their motherland because with Spain's royal authority now extinguished there was no central government leading them. Also, with the fact that Spain's defeat also lead many colonists to believe their were unfit to rule if they could not even protect themselves from invaders. 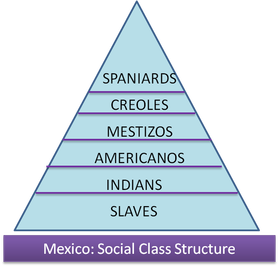 Mexico, at this time, was very distinguished  in terms of its social classes as the picture aside pictures. Creoles resented both Spaniards who were born in spain and the country itself. This is due to the fact that they were seen lower as human beings through the eyees of their spanish brothers due to them being born in the primitive native land of Mexico and not in Spain. They slso resented the Monarchy's push for heavier taxes and excersise of greater power within the territories. Mestizos, Americanos, and Indians also felt this injustice but the by class up above them. These classes were divided by race, religion and sometimes language which furthered the lines of division between each group. One indivual by the name of Alexander Von Humboldt wrote a political essay on the classes of Mexico called Problems And Progress in Mexico, c. 1800. Now, due to Spain;s extensive laws of non-entry of foreigners, this description is especially valuable. In it he describes "Mexico [as] the country of inequality. No where does there exist such a fearful difference in the distribution of fortune, civilization, cultivation of the soil, and  population...The capital and several other cities have scientific establishments, which will bear a comparison with those of Europe. The architecture of the public and private edifices, the elegance of the furniture, the equipages, the luxury and dress of the women, the tone of society, all announce a refinement to which the nakedness, ignorance, and vulgarity of the lower people form the most striking contrast." Essentially, Mexico is sitting on a "balkin powderkeg"  as Humboldt alludes to in his description of the distance in fortune between the creoles and lower classes. With such a difference in the distritbution of wealth, this causes a downfall effect with all the classes becasue they each feel that their are not recieving their due in the wealth. Although creoles were well off compared to the rest, they certainly felt injusticed compared to their wealthier counterparts in Spain. 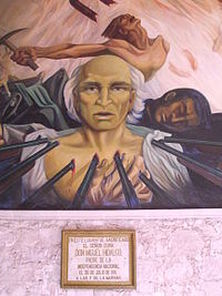 http://www.ask.com/wiki/Grito_de_Dolores
Within this time frame, Hidalgo was the catalyst in setting all the necessaries in place in beginning and setting off this revolution. He was a creole priest who sympathized with the people under the harsh and authoritarian rule of the Spanish monarchy. Within his speech, "Cry of Dolores," he said "my children: a new dispensation comes to us today. Will you receive it? Will you free yourselves? Will you recover the lands stolen three hundred years ago from your forefathers by the hated Spaniards? We must act at once… Will you defend your religion and your rights as true patriots? Long live our Lady of Guadalupe! Death to bad government! Death to the gachupines!" He, in truth, was the people's hero, fighting for their rights as indiviuals under an oppressive government. As depicted in his speech, many shared his view of the Spanish and planned to revolt. However, it was essentially in his death that set the revolution into motion. At his execution, Calderon Bridge, was the first of many resistance movements of the creoles and several other classes against the Spanish. In the eyes of the people, Hidalgo symbolized their voice against the government and so when he was executed, the people, in truth, saw their own hope of equality vanquish which in truth began the full blown revolution. Hidalgo is considered to be a cause of the Mexican Revolution becausee he simply set the pieces in place through his efforts to spread word of the injustices delievered by the Spanish rule.