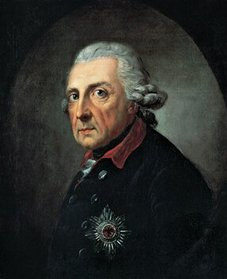 Frederick the Great
"Politics is the science of always using the most convenient means in accord with one's own interests. In order to act in conformity with one's interests, one must know what these interests are, and in order to gain this knowledge, one must study their history and application . . . One must attempt, above all, to know the special genius of the people which one wants to govern in order to know if one must treat them leniently or severely, if they are inclined to revolt . . . to intrigue . . .
A well conducted government must have an underlying concept so well integrated that it could be likened to a system of philosophy. All actions taken must be well reasoned, and all financial, political and military matters must flow towards one goal, which is the strengthening of the state and the furthering of its power. However, such a system can flow but from a single brain, and this must be that of the sovereign. Laziness, hedonism and imbecility, these are the causes which restrain princes in working at the noble task of bringing happiness to their subjects . . . A sovereign is not elevated to his high position, supreme power has not been confined to him in order that he may live in lazy luxury, enriching himself by the labor of the people, being happy while everyone else suffers. The sovereign is the first servant of the state. He is well paid in order that he may sustain the dignity of his office, but one demands that he work efficiently for the good of the state, and that he, at the very least, pay personal attention to the most important problems . . ."
-Frederick II (the Great) of Prussia 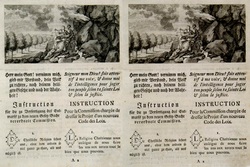 Title page of the Nakaz
The difference between an absolutist and an enlightened absolutist is based
on a broad analysis of how far they embraced the Age of Enlightenment. For example, although Empress Catherine II of Russia entirely rejected the concept of the social contract, she took up many other ideas of the Enlightenment and incorporated many ideas of enlightened philosophes, especially Montesquieu, in her Nakaz. The Nakaz was a statement of legal principles authored by Catherine II, which permeated with the ideas of the Enlightenment, while keeping many aspects of absolutism. In 1767, Catherine sent the German edition of her Nakaz to Frederick II of Prussia and the French one to Voltaire. In effect, the monarchs ruled with the intent of improving the lives of their subjects in order to strengthen and reinforce their authority.
"For the benefit of my Empire I pillaged President Montesquieu, without naming him in the text. I hope that if he had seen me at work, he would have forgiven this literary theft if only for the good of 20 million people which it may bring about. He loved the humanity too much to be offended; his book was my breviary"
-Catherine II speaking of her Nakaz 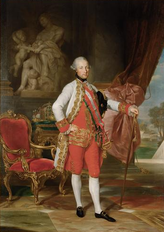 Joseph II, ruler of Austria
Many Despots used the enlightenment not only to achieve reforms but also to enhance autocracy, crush opposition, suppress criticism, further colonial economic exploitation, and consolidate personal control and profit. Absolute rulers of countries such as Russia and Austria began to fear uprising of the lower classes, therefore they began to reform their own politics to prevent violent revolutions like the French Revolution. Reforms also helped to bring countries into a more modern world, such as the case of Charles III, king of Spain (1759 to 1788), who tried to rescue his empire from decay through reforms such as weakening the Church and its monasteries, promoting science and university research, facilitating trade and commerce, modernizing agriculture and avoiding wars. Although some of these reforms helped prolong the monarch's rule, such as in Russia and Spain, and generally raise the standard of living, others where not as successful. Emperor Joseph II, ruler of Austria (1780–1790), was over-enthusiastic, announcing so many reforms that had so little support that revolts broke out and his regime became a comedy of errors.

European Enlightened Despots changed their polices and had many reforms. However, these reforms did not diminish the power of the absolute ruler. Therefore, the Despots were able to calm rebellious thoughts within their own societies while keeping their political power.