How government revenue has shaped the Arts

Throughout history, many of the artistic developments that have shaped modern society have been funded primarily through the government or government officials. This was especially true during the age of the Renaissance, as competition between states rose and societies began to value innovation and art and scientific progress.

The Medici family tree.
During the 15th and 16th centuries, the Medici family of Florence was estimated to be one of the wealthiest families in all of Europe. They rose to power through the Medici Bank and maintained significant political control for several centuries. One could argue that the Medici family was a political dynasty that was, in and of itself, a source of government during that time period. They were undoubtedly a considerable factor in the economic rise of Florence, yet their greatest contribution lies with their immense contributions to art and architecture. The Medici’s long history of art patronage began with Giovanni di Bicci de' Medici, when he commissioned Brunelleschi for the reconstruction of the Basilica of San Lorenzo, Florence in 1419. Also notable by Brunelleschi is the dome of the Florence Cathedral, which was built around 1461. Cosimo the Elder later sponsored the sculptor Donatello to create “The Bronze David,” which gained mass appeal as it was the first free-standing nude since ancient times. Several members of the Medici family worked with Michelangelo, who was perhaps the greatest artist of all time, in order to construct such masterpieces as the ceiling of the Sistine Chapel and the ambiguous sculpture “Apollo/David.” Furthermore, Lorenzo the Magnificent was the most prominent family member in the commissioning of both Michelangelo and Leonardo DaVinci. During the high Renaissance, the Medici Pope Leo X commissioned the painter Raphael for a number of works.

The legacy of the Medici family is that they were most prolific art patrons in history. The vast repercussions of their contributions are still seen today. They are perhaps the foremost example of how government revenue can stimulate an economy and create an explosion in the arts. 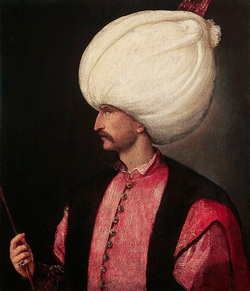 A portrait of Süleyman "the Magnificent."
Under Süleyman “the Magnificent,” the Ottoman Empire reached the pinnacle of its military and political power. The Ottomans conquered and maintained control of Hungary for over 150 years. The Ottomans advanced as far west as Vienna, threatening the Hapsburg, as well to the east controlling Iraq. The Ottomans also controlled the North African ports, and for a time completely dominated the sea.

This geographic expansion, trade, and economic grows helped breed a “Golden Age”. The tremendous cultural and artistic activity glorified the Middle Eastern region. Developments transpired in every area of the arts, such as calligraphy, manuscript paintings, textiles, and ceramics. Some famous artists include the calligrapher Ahmad Karahisari, the painter Shahquili and the “illuminator” Kara Memi.

The Ottomans also excelled in architecture, particularly in public buildings. One famous Architect is Sinan, who is mostly known for the mosque of Süleymaniye in Istanbul and of Selimiye in Edirne. He has designed hundreds of buildings across the Ottoman Empire and contributed to the spreading of Ottoman culture. Süleymaniye also commissioned the tile revetment of the Dome of Rock in Jerusalem, as well as several additions to the sites of Mecca and Medina.

The mosque of Süleymaniye 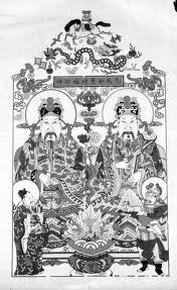 This is a samurai leader. Notice the extent of the detail.
Wood block prints are a traditional Japanese craft, in which paint is applied to a patterned piece of wood, and then held against paper in order to make a design.

During the time of the leader Tokugawa Leyasu and his descendants (1542-1616), Japan was controlled by a strict Feudal government. The creative arts came not from its leaders, who usually were a militant base, but rather from the two lower classes in the Confucian social hierarchy- artisans and merchants. Although officially put down, they were free to reap the economic and social benefits of this flourishing age. In the late 1630s, contact with the outside world was cut off, strengthening the traditions of the past reviving and refining. These traditions strengthen their artistic value keeping the wood block prints going.

Below is a video on how to make Wood block prints.