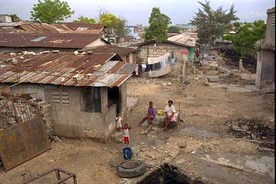 Area of Haiti Today
This revolution was the first completely successful slave revolt in all of history, first successful revolution in Latin America, and the first non-European state to emerge from Western colonialism.  It became only the second independent republic in the Americas, and was a symbolic break with Europe.  This revolt was important because it affected slaves and their owners in surrounding nations.  Slaves saw it as an example of a triumphant revolution and gained hope, while slave owners became more cautious and tightened their grip on their slaves.  This led to a temporary expansion in slavery.  The revolution was a slap in the face to Napoleon and his campaign for the conquest of Europe and American colonies.  France's loss of Haiti persuaded Napoleon to sell the Louisiana Purchase to the United States.  Part of this land developed into slave states, increasing slavery in the Americas.  Finally, hope from this revolution inspired many other rebellions, especially in the British West Indies, like Jamaica.  It also encouraged the growing abolitionist movement.  So, there were both positive and negative affects on slavery throughout the Atlantic world.

Within Haiti itself, the Haitian economy was crippled by the revolution.  It's plantation system that exported much sugar and coffee was largely destroyed by the fighting and burning of plantations, leaving the country to small-scale farmers with greatly reduced exportation.  Because of this sugar trade deficit in Haiti, which previously was 40% of the world's supply, Cuban sugar production and trade greatly increased and profited.  Also, since the newly established Haiti had declared every citizen equal, racism became a problem.  This created internal divisions among the races, which along with more opposition from external forces brought about unstable politics and poverty in Haiti.  Jean-Jacques Dessalines ended up declaring himself governor-general (dictator) for life, which disregarded many of the enlightenment ideas that the revolution was based off of.  He over-militarized Haiti, forcing all African-American men to become either a soldier or a farmer.  They are still a country suffering from poverty and lack of resources today, so ultimately the country and its "free" people did not benefit very much from independence from France.