The Russian Revolution ushered in a Communist era into this region. As the government enforced its new political philosophy, the lives of women were altered drastically. Just as they were in China and Cuba, Russian women enjoyed an expansion of rights both in their personal and public lives. However, as what seems to be repeated throughout all history, women were unable to achieve fully equal status with men. 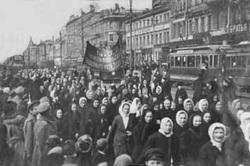 women protest in February Revolution
During the first stage of the Russian Revolution, women were highly visible in the effort of overthrowing the tsarist regime. Under the provisional government, women earned the rights to vote, serve as attorneys, and equal rights in civil service. The majority women advocating for this type of equality were the upper and middle classes of women while the lower class women advocated for "bread and peace." After this, the unprecedented numbers of women began to join the Russian army and many fully female combat units were assembled. This influenced the Bolshevik party to rethink their stance on the role of women.

The Bolshevik Party & the October Revolution 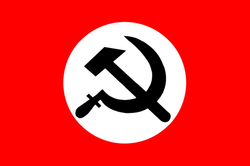 Bolshevik party symbol
The Bolsheviks had formerly condemned feminism as "bourgeois" because it was influenced by the upper classes and tended to divide the working class and gender roles. Because the Bolsheviks did not believe in any division among classes, including the division between men and women, they initially did not have any specific policies centered around women. They also refused to create a bureau for women workers. However, by 1917, as the Bolsheviks overthrew the provisional government, the party began to give in to the demands and created the Women's Buruea. The Bolshevik Party, now in power, advocated the "liberation of  women and the transformation of the family." Russian women were now on their way to gaining full legal and political equality. By reforming laws like the Code on Marriage, the Family, and Guardianship, women received equal rights over their property and earnings, divorce was legalized and made easier, and illegitimacy was abolished. In addition to these reforms, under the Bolshevik rule, marriage became a civil action among consenting adults, abortion became legal, maternity leave was mandated, women were no longer required to take their husbands' surnames, and women were mobilized as workers in Russia's drive to industrialization. Soon after the October Revolution, civil war broke out in Russia, and although women were not required to fight this battle, about 50,000-70,000 women enlisted in the Red Army, showing the support that the Bolsheviks were able to gather from women.

The Bolshevik Party set up a Women's Department of the Communist Party or Zhenotedel in 1919. This department was led by all women, and they pushed a radical feminist agenda in the 1920s. Its main function was to spread news of the revolution and enforce its laws. The Zhenotedel organized conferences for women, equipped women with the skills to run day-care centers as well as medical clinics, and published newspapers and magazines aimed at a female audience. It also provided literacy and prenatal classes and political education to working class and peasant women. The Zhenotedel did face massive opposotion from male communist officials and was finally abolished by Lenin in 1930. 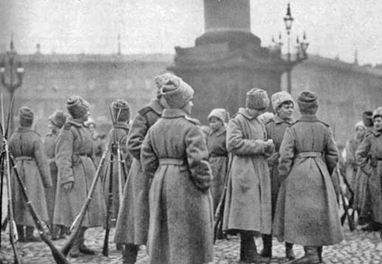 Peasant women were not very involved in both the feminist movement as well as in the Bolshevik revolution. Their apathy towards the feminist movement is most blatantly seen in their refusal to be involved with the Women's Bureau. Peasant women lived in patriarchal villages and that was the only life they knew. Many believe that these women saw the revolution as a threat to the way they live. They were already impoverished and did not want and danger from the war. 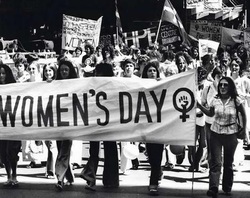 International Women Workers’ Day in Russia
Although women achieved rights that takes decades to establish in a few short years, even these eutopian reforms have their limits. In 1930, Joseph Stalin feared that the women question would take away emphasis from industrial production. So, he declared the the women's issues, "solved." Consequently, this was the year he abolished Zhenotedel. Very little direct discussion of women's rights was emphasized in the following decades. Because male domination in the family was still the norm, women had to take on the burden of housework, child care, and paid employment. In addition, women rarely achieved a top political leadership role in Russia. Directly after the Russian Revolution, women did enjoy a time of equality and growing rights. However, as time went on, this social issue has not been given much attention.