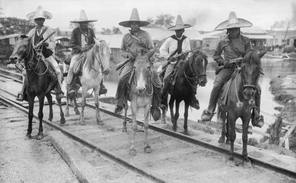 While, the American Revolution (1775-1783) took place over 100 years before the Mexican Revolution (1910-1920), they share many similarities. Both the revolutions were fueled by the pursuit of Enlightenment ideals: life, liberty, and property. Both countries had to engage in a long drawn out war against their mother nations. Both of the revolutions were even driven by the stark socioeconomic inequalities in their colonial societies. In America, the settlers were stricken of the rights they were so accustomed to in Britain (i.e: the court system had Americans shipped all the way to Britain to be tried) and had no representation in Parliament. In Mexico, many native Mexicans were kept impoverished, working as miners and farmers on wealthy landowners' plots.

However, for all the similarities in their causes, the American and Mexican Revolution had vastly different outcomes. The two nations ultimately adopted the same political system (democracy), however they ended up being extremely different geographically, militarily, socially, religiously, and economically.