War and Peace in a global context: Analyze the impact WWI had on Europe and the U.S. including the women's movement & the Great Depression, compare origins of WWII in Asia to Europe, & compare the two world wars, including causes, uses of new tech, impact on the economy, loss of human life & political outcome. 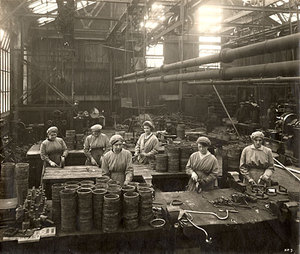 Women working in the factories
As the World War was underway, there was many casualties in the war and many more men serving abroad, so the brunt of the production in factories were left to the women and African-Americans left in the U.S. So because of the deficiency in working men, women, who had once only contemplated staying home to manage their house and families, were now working in all types of factories. There was many uses for the women in the new factories which was from the creation of ammunition and military products to the production of things such as household goods. Women also were used as nurses in local hospitals. About one million women worked long hours in factories fulfilling the jobs usually held for men only. The majority of women in the U.S. were working and making their own wages in order to support their families while their men were at war.  Other women joined the effort just to help the Americans in the war.
The women working in factories not only supported the war effort by providing materials for the military and American citizens, but because of all of this working in the factories they were able to promote the independence of women. Women were able to show their strength and independence.Women gained more respect from politicians, and once the war was over there was many leaps in respect to women's equality. And in 1920 the 19th Amendment guaranteed women the right to vote.  Wilson had championed it as “a necessary war measure.”  But it seems to me that the real reason men dropped their opposition to the 19th Amendment was the 18th Amendment. Men had opposed women’s suffrage in part because they were afraid women would make prohibition their number one priority.  In 1920, men were no longer afraid giving the women the right to vote would lead to prohibition. The reason behind this shift in view was because the prohibition was already there.


The video below shows some roles for women in the war. 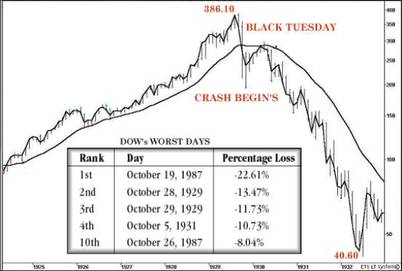 In 1921 in the Treaty of Versailles, Germany accepted the blame for World War I. They were forced to pay 33 billion in reparations (Equivalent to 2.7 trillion today). Germany was also restrained by other restrictions which caused Europe, which was hurt by the war and which could have used Germany's trade and resources to help boost themselves, in an economic Depression. America which depended on trade with Europe was hurt as well. This did not come into fruition until Black Tuesday which was October 29, 1929, the day the New York Stock Exchange crashed. The New York Stock Exchange Crashed when thee prices for stock were too high, far higher than they were really worth. Then they fell sharply. People who had unwisely borrowed money to buy high-priced stocks (intending to sell the stocks at a profit and repay lenders), went bankrupt. Black Tuesday marked the beginning of the Great Depression, a period of economic hardship in the United States lasting from 1929 to 1939.

The World War I was only one of the cause of the Great Depression, however. Unequal income distribution was another problem. While businesses showed great profits during the 1920s, workers got only a small portion of this wealth in their low wages. People who had small incomes therefore bought merchandise on credit. Also, during the 1920s American farmers in the Midwest had been suffering from drought conditions. Others had geared up for high production, but after the end of World War I they found that the international market was overstocked and prices fell so low that they could not make a profit on their crops. The banking industry also made mistakes in too freely lending money, especially to foreign countries trying to rebuild after the war. These countries had trouble repaying their debts because of the things mentioned previously. To make matters worse, the United States (and other industrialized countries) charged high import taxes on goods that other countries offered for sale. These taxes prevented countries from selling the goods they needed to earn the money to repay loans from U.S. banks. Because of this, America was forced into the Great Deppression, which did not dissipate  until WWII.

The video contains stories from the Great Depression that help paint a picture of how bad it was.