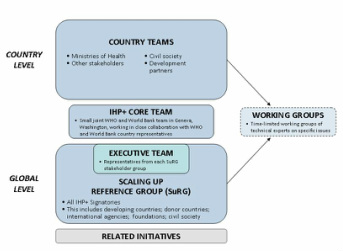 Here is a diagram illustrating the World Bank's services to its 'customers'.
With the ending of WWII, the victors (United States, Russia, Britain, and France) wanted to find an alternative solution to world war and a world economic depression. By learning history, they knew that neither they nor the rest of the world could survive through another  post-world depression  that occured after WWI. It casued countries to go bankrupt and foreign investment to drop extremely dangerous points which ultimately created high tariffs on imports and national economies to remain isolated. However, with no desire to revert back to the past, a conference was called in New Hampshire called the "Bretton Woods System". This established the 'rules of engagement' in global commercial and financial dealings. Furthermore, it ultimately promoted the capitalist ideas of free trade, investments and stable currency values. Also, It was here that they established the World Bank and the Internation Monetary Fund based on set aggreements which gave underpriviledged courntries to catch up on the world scale through financing them loans. These institues still play a great role in the U.S. and beyond its borders. In a artical written by Doug Palmer of the Washington Post elated statements said by new Ex-President Zoeliick of the World Bank. During the World Bank meetings in Washington, Zoellick said "We're beyond a model of charity to poor people," in remarks to the Inter-Action alliance of development groups. He argued World Bank programs contribute to global stability and economic growth, which in turn benefits both U.S. companies and the country as a whole." This suggests that much of the aid the World Bank gives to developing courntries is in great benefit to our courntry as well. The World Bank as helped establish globilization through its transfer of money in very transactions. No longer do you see countries isolated when in need but helped through loans given indirectly by other countries. 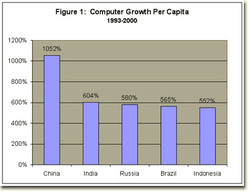 Here is a diagram dipicting computer sales between 1993-2000.
New technologies were essentialy 'vehicles' used to create a bigger and faster web of reglobilization. Agents such as large cargo ships and huge oil tankers facilitated the movement with fiber optic cables connecting all parts of the globe which later established the internet. This is due to the fact that goods. and services could now be transported to anywhere on the globe. This connected all six of the continents becasue now businesses could establish customer relations anywhere as the markets where now not a matter of which country would allow free trade but when. No longer are businesses limited to one market or demographic due to political issues or high costs to export goods, they could locate anywhere and still make money. These advances have facilitated efficiency gains in all sectors of the economy. With the wave of technology increasing since the last 15 years, it has only created a flatter globe. A website awareness group called Mercy Corps aided that "it provides the communication network that facilitates the expansion of products, ideas, and resources among nations and among people regardless of geographic location. Creating efficient and effective channels to exchange information, it has been the catalyst for global integration." Essentially, the internet and computer technology has connected indiviuals from all over the world, allowing information of rebel attacks in Serbia to reach those in the U.S.

Here is a diagram demonstrating how neoliberalism combines all three apects of economy.
No longer do we see colonial powers or imperialism but now a new type of leader taking place, capitalist. The two main supporters of this idea pushed 'neo-liberalism' as the way to structure this new concept of 'reglobilization'. It basically pushed the same ideals as the Bretton Woods System, however, pushed businessmen and leaders to see the world  as one single market or entity. It favored low tariffs of all countries, the movement of capital, a deregulation of the government and to allow privatization of many markets there were centrally ran. Stanley Fish of the New York Times described that, "in a neoliberal world, for example, tort questions — questions of negligence law — are  thought of not as ethical questions of blame and restitution (who did the injury and how can the injured party be made whole?), but as economic questions about the  value to someone of  an injury-producing action relative to the cost to someone else adversely affected by that same action." It essentially caused people to think of their economy as a group of entities and these relationships  affected one another. No longer are businesses just liable for themselves but also the effects of the goods and services they produce. This ideal also encouraged  a workforce that was both mobile and temporary while suggesting to cut taxes and decrease local government spending. Now, the institiutions created in the Breeton Woods Systtems, World Bank, and the Internationals Monetary Fund, were the main endorsers for these practices and established many of these policies with their customers (nations) which allowed this system to spread quickly. 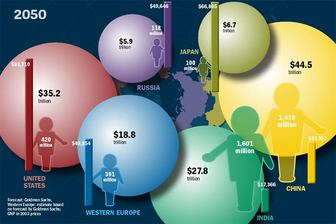 This is a diagram illustrating the predicitions of the global wealth in 2050.
Obvisously, one main reprecussion of this massive 'reglobilization' was a boost in growth on a global scale. This created an extreme amount of wealth on a general level. With the world's combined total output increasing from 7.1 trillion in 1950 to 55.9 trillion in 2003. International bank loans have risen from 9 billion in 1972 to 1.465 trillion in 2000. While companies operating on multiple shores have increased from 7000 in the 1960's to 65000 in 2001. Furthermore, with more money do we begin to see the life expectancies grow throughout the world. More people working means more people buying goods and services from a market that is know flat as it can know reach every customer.  This effect has given nations higher life expectancies of its people with a combined infant mortality rate increasing populations exponentially with birth rates exceeding death rates. 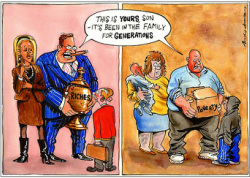 Here is a illustration demonstrating how different people lived on either side of the spectrum and why there were those were against capitalism and globalization because of the large gap between the rich and the poverty line.
However, with this boost of capital create this dramatic shift or rift between the haves and have nots. While all social classes boosted from the increase in creation of wealth, it did not mean that people grew out of poverty. Essentially, the gap between the rich and the poor only grew wider. With jobs being outsourced to other foreing countries many were left with out jobs. Or depending on hwere you lived dictated where you stood between poverty level and beyond. This created a strong belief in 'antiglobilization' where impoverished indiviuals largely agreed that neo-liberalism lowered labor and wage standards which left them unable to enjoy the fruits of their labor unlike that of the indiviuals more well off in their society.  On a global scale, this means that it created a larger gap between the ever rich north of the world and the poverty stricken south of the equator. This caused tensions and a new problem in global affairs as the South demanded a 'new international economic order' that favored them or the pooer nations then the rich. They also issued grievances on foreign aid representation in the global counsels, desired to rid themselves of their hige debts, and the high export tariffs placed on their cash crops et by their more richer neighbors to the North.