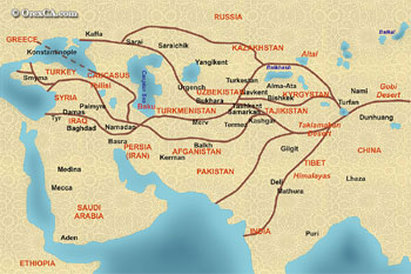 In the beginning of the third wave, global trade routes were encouraged by state practices. Italian City States became the center of resurgence of trade due to the prime location that created an economic superhighway. They shipped goods to trade fairs, which led to the emergence of more and more towns. The growth of the trade networks and cities lead to the new social class: the middle class, and reshaped Europe into a Renaissance. The flourishing West lead to a higher demand for products in Asia. However, the existing trade routes that spanned across the Mediterranean and through the Middle East were interrupted by the Ottoman Empire. This leads to a need for new ways of trade, and they begin to use water routes to Asia. These routes later go on to fuel some of the biggest discoveries of all time, such as the Americas, and the Columbian exchange, which further accelerated the exchange of people, plants, animals, ideas, and technology.